After launching our Public Consultation Call three weeks ago we have received 1533 votes on our All Our Ideas page Wiki Survey. Thank you for your contributions to this inquiry. We’ll talk about the results of these votes and how we’re going to approach choosing the 10 to 15 winning datasets to be used in the actual Belgian Local Data Census.

In the end of June, before we started this public consultation we had a meet-up of Open Belgium ambassadors, local public servants and citizens around the idea of building a Local Data Census during Open Antwerp. Maaike Scherrens and Mathias Van Compernolle introduced the participants to the 15 standard datasets that are now on a still empty Local Data Census webpage. 8 were refused, 1 abstained and 6 were approved, although some proposed to split these up into multiple smaller datasets.

Here are the 6 approved standard datasets:

What we were very grateful about during the Open Antwerp session, was that a lot more datasets were suggested. In merely an hour and a half the participants suggested 22 possible datasets, which together with the 6 displayed above formed the base for the Public Consultation on the Wiki Survey.

Here are the 22 suggested datasets:

So even before the Public Consultation started, we had more datasets than there should be on the Local Data Census. It is recommended to have around 10 to maximum 17 datasets. But we really wanted to break the conversation open to everyone in Belgium and not just determine our choices on one workshop. So we decided to host a live Wiki Survey that would run for three weeks. Most of those votes were given in the first few days: 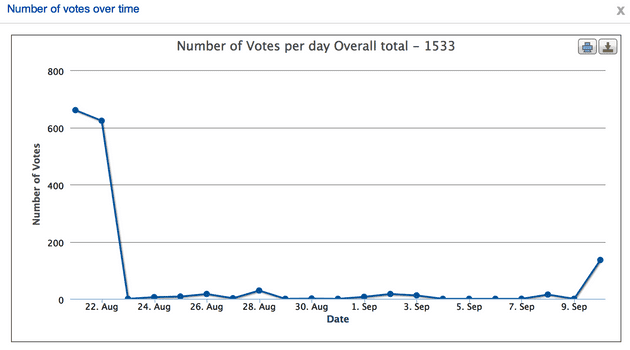 But we’re glad that we did suggest to do it over three weeks, because the new ideas coming in were spread out during the whole period. 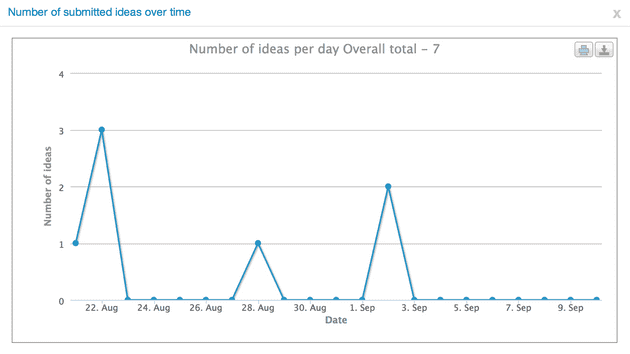 So in the end we had no less than 35 different datasets, or at least variations. And a few of the crowd suggested datasets during the Wiki Survey actually made it quite high in the overall ranking. 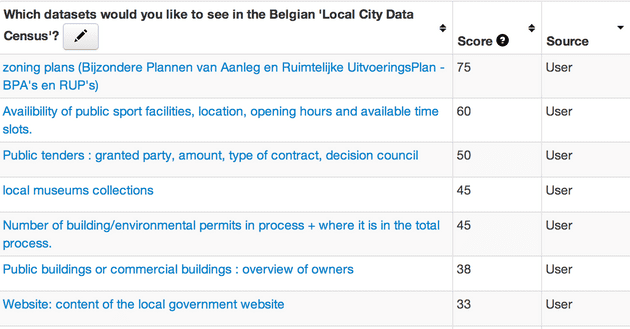 Rough results of the Wiki Survey

If you want to look into the raw data of the survey, you can find it here as comma seperated csv files.
Below we added the full results list, based on the score given by the Wiki Survey tool.
Do take note that this ranking is based on the number of positive votes, not total votes. So ideas that were brought up later, but had a lots of positive votes will have a much higher score than datasets which have many more positive votes, but also had a few downvotes along the way.

So what are the final steps after this public consultation?

This dataset list and current ranking will be presented to our Open Belgium Ambassadors to assess and discuss a few things. This will be crucial to determine which of the datasets we will keep. The following questions still need to be answered:

After this final decision making part we’ll have a list of datasets that will actually be implemented in the Local Open Data Census. We’ll add definitions and a how-to so that anyone can start adding datasets of their city. When the platform is ready, we’ll release a blog about it on the Open Belgium website, start contacting local goverments to implement their efforts and have a workshop during the Open Belgium Confere in Namur in February 2015. So we are getting closer to a final result, which will probably be around the end of October or early November.

Thank you everyone again for your patience and your input on this census. It’s good to see that this Local Data Census will eventually be a crowdsourced product that is specifically designed for cities in Belgium.
If you have further questions on this project, feel free to let us know in the comments below.