According to the Global Open Data Index, Belgium ranks 53d out of 97 countries, going up from 27% to 39%. A status quo one might think, knowing that last year Belgium ranked 58th, but a lot has happened since.
The Global Data Index, a tool developed by Open Knowledge, ranks 97 nations based on 10 key national datasets. The UK sits at the top with 96% opened up data on government spending, budget, postal codes and more. Belgium however remains in the middle of the list between Croatia and Costa Rica.

Yet a lot has changed: KBO/BCE opened up their company register database as open data [1] earlier this year and Irceline launched the pollutant emissions website [2] opening up data on air quality. Detailed results can be found at http://index.okfn.org/place/belgium/. “If nothing happened regarding opening up Belgian data, we would have dropped to the 83rd place. Opening up data is a global phenomenon, it is not happening only in the Western countries”, says Pieter-Jan Pauwels, community coordinator at Open Knowledge Belgium.

That is something the new federal government realised, especially when neighbouring countries take on the 1st (UK), 3rd (France), 9th (Germany) and 16th place (Netherlands). In the new federal policy agreement, open data was mentioned several times and where once nobody was directly responsible we now have a minister responsible for the Digital Agenda. Minister Alexander De Croo announced last week at the Opening Up conference that this number is too low and will be higher next year. Together with organisations such as Leiedal and Open Knowledge Belgium, he signed the “Open by default” charter, where Belgium now promises to open up datasets if there are no good reasons not to. 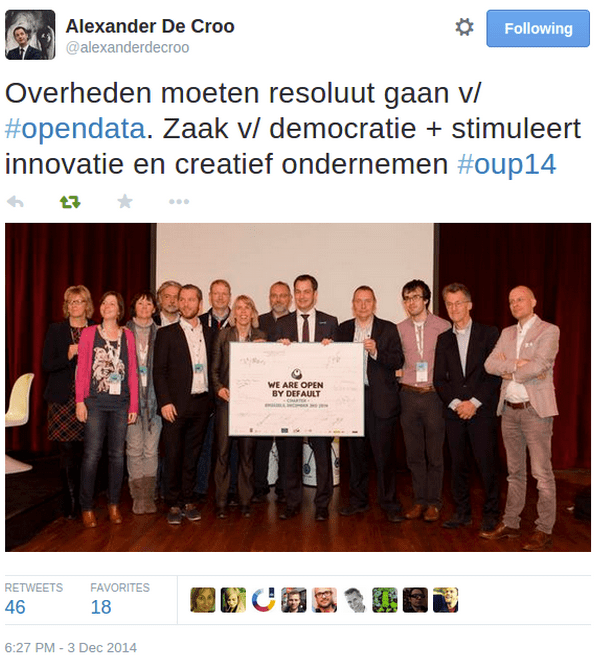 The 23d of February Open Knowledge Belgium vzw/asbl will organise the Open Belgium conference in Namur with minister De Croo as one of the keynote speakers. During the conference we will discuss open data on different levels in Belgium as well as host hands-on sessions on e.g., open science, open tourism, open transport or open street map. The full programme is available at http://2015.openbelgium.be.